12 Top Sites to Visit in Athens – for Delightful Reasons! 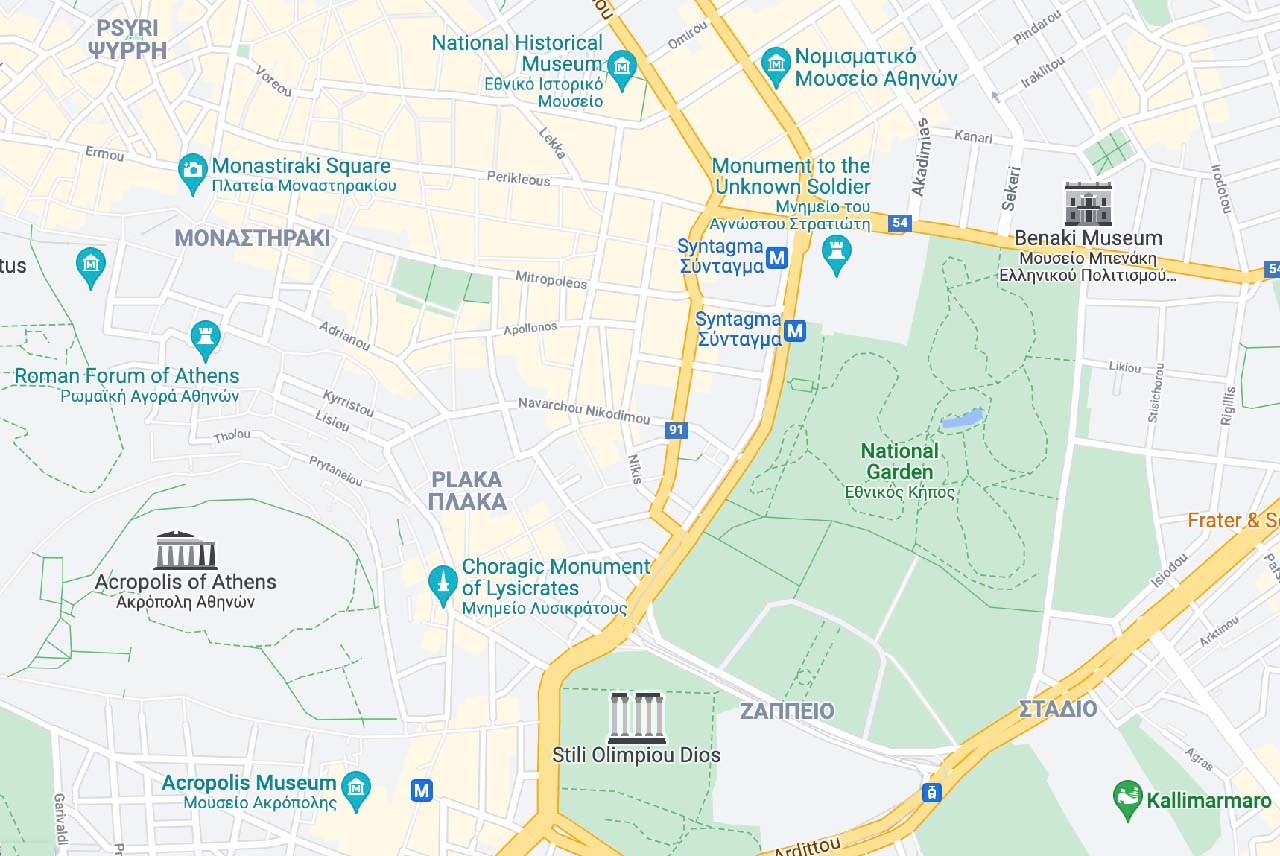 Athens is definitely one of the best cities in Greece – with 12 top sites to visit.

And most of the main attractions are nicely grouped together.

Athens is the home of ancient treasures. Our very first destination was the Panathenaic Stadium. The world’s ancient Olympics were here, as well as the first modern Olympics in 1896! Then, in the 2004 Olympics, the stadium was used for the historic marathon finish and archery contests.

As a stadium, it’s horseshoe shaped, although the track is an oval. The track is pretty narrow and the 400 m is a bitch. Now 2600 after it was built, it’s no longer flat either, but slopy! Today, this theatre would cost a fortune as it was built 100% in marble! Nothing but the best for the goddess Athena, in whose honor the Panathenic Games (first Olympics) were held. Today, you can go for a jog there between 7.30 – 9 am – although do check Covid restrictions before you leave.

You can see it for free from the outside but it’s about a $5 to visit the inside.

The Stadium is next to the rocky hill of the Acropolis – the most famous hill in all of Greece with several top sites to visit in Athens. On the south side of the Acropolis lies Theater of Dionysus, classical Greek plays were first presented. It was the first stone theatre ever created. The theatre was build to honor Dionysus, who is the god of fertility. Some fun fact: a large statue of the god had been placed in the front row so that the god himself could watch the plays. According to tradition, in 534 or 535 BC, Thespis astounded audiences by leaping on to the back of a wooden cart and reciting poetry as if he was the characters whose lines he was reading. In doing so he became the world’s first actor, in the Theater of Dionysus.

The building next to it on the Acropolis is the Parthenon — the ultimate top site to visit in Athens, On the list of the UNESCO as a World Heritage Site, the Parthenon is Greece’s most famous temple – and there are many temples in Greece – trust me! The temple is dedicated to the goddess Athena, from which the city derives its name. The temple has 65 imposing giant columns and maintaining / restoring the site seems an ongoing operation. The site dates back to between 447 and 438 B.C. It’s truly ancient. Pro travellers tip: go see the temple at (sunrise or) sunset for the most splendid pictures with literally ‘glowing’ marble. On the North side of the hill, you’ll also find a second temple, Erectheion, another Greek temple, which personally love even more as it features statues of beautiful ladies (Caryatids) rather than columns.

Athens houses some of the world’s greatest museum collections. And of course, let’s start with the Acropolis Museum (which sits at the foot of the Acropolis, and which first gallery exhibits ‘The Finds of the Acropolis Slopes’ , flowing on to galleries of the various ages of the Acoropolis. Then, on the 3rd floor is the Parthenon gallery, and this is where you’ll find all the statues that used to be in the Parthenon. The museum is as vast as the Parthenon was large with: thousands of marble and stone busts and statues!

After all this sightseeing, it’s time for some relaxation and/or shopping therapy?!* Below the Acropolis, is the restored historical Plaka neighborhood. Here you can shop for olive oil soaps, worry beads, handmade leather sandals, evil eye talismans and handmade Greek pottery, or simply sip a drink or have some lunch at a local bar and do some people watching. (BTW Plaka is a great neighborhood to stay if you’re a first time visitor to Athens.)

Worthy of its own mentioning, it is the colorful and large Monastiraki Flea market, also ‘right there’. Think of this as a ‘flea market’-neighborhood! In this maze of alleys and pedestrian streets, you can shop for some authentic relics, antiques and jewelry, or some indigenous flavors, besides artisanal soaps, handmade sandals and souvenir T-shirts. This lively area also hosts some well-known iconic landmarks, like the ruins of Hadrian’s Library, the Ancient Agora and the rebuilt Stoa of Attalos. The remains of both the Greek and Roman agoras remind us that in ancient times, this also was an area to shop.  The streets surrounding the market areas are filled with traditional tavernas and restaurants, many with splendid Acropolis views.

Talking about sunsets, we recommend visiting one of Athens’ rooftop bars that overlook the Acropolis. There’s https://aforathens.com/bar-restaurant/, https://www.tripadvisor.ca/Restaurant_Review-g189400-d866612-Reviews-Galaxy_Restaurant_Bar-Athens_Attica.html or try the Tudor Hall restaurant (https://www.tudorhall.gr/) on the 7th floor of the https://www.marriott.com/en-us/hotels/athgl-king-george-a-luxury-collection-hotel-athens/overview/ .

When restored, time for more sight seeing?! How about the National Archaeological Museum? This is really a MUST-DO, even if you’re not so ‘into museums’. Amongst its 11,000 Greek arti-facts and treasures, the highlights to look out for:

Not sure when you’ll be travelling to visit Athens, but on Sunday 11:00 am** you can witness the changing of the guards (in traditional uniforms) before the Hellenic Parliament Building at Syntagma Square. Quite a spectacle! Syntagma Square is considered the centre of Athens. Besides the changing of the guards, the square also ‘hosts’ major events like political demonstrations and celebrations. This is located on the NE corner of the National Garden (i.e. which is diagonally opposite of the park to where the “Olympic” Panathenaic stadium is situated.) ** A mini version of it all is on the top of the hour, every hour, every day.

Athens is also the birthplace of Plato ( 428-348 BCE), where he founded the world’s first university, The Academy, in the 380s BCE. Remnants of the buildings where he used to teach remain in park ‘Akadimia Platonos‘ on the outskirts of Athens.

Whether you are aware of it or not, Plato is still very much alive today in modern America. His most famous work is the Republic, which details a wise society run by a philosopher.  His famous dialogues showcase his metaphysical theory of forms. OK. It’s not that this park is so ‘amazing’ to look at. And it’s out of the way too. More important perhaps is that you become aware of the many amazing roots our western society has in ancient Athens, Greece.

So, if this park is a tat too far to your itiniary, consider taking a stroll in the Lycabettus Hill, which is a popular park for locals to go. There is a little cable car that takes you to the top of the hill in 10 minutes and gives you a spectacular panoramic view of the city. Lycabettus Hill is located a bit north of the other sites mentioned here, and again, is particularly popular at sunset.

An alternative park is Philopappos hills. You can climb up on it and gain some amazing views.

This ancient landmark is the most famous agora of Greece. Today, you can visit the ruins of what once was a gathering place & a museum with arti-facts. It’s near the Acropolis and the Monastiraki square. Sort of inbetween.

Gateway to the Greek islands

Athens is also the gateway to the Greek islands and other places to visit in Greece, such as Delphi. Most airlines fly into Athens for any greek destination.

Your Tour to See the Top Sites in Athens

The suggested tour around Athens: Acropolis + Acropolis Museum, the ancient Agora of Athens. Then walk to Temple of Olympian Zeus, Hadrian’s Arch, Stadium and Botanical Gardens.

Best Daytrip out of Athens: the Athens Riviera!

Take a tour to Cape Sounion and be sure to see the Temple of Poseidon (God of the Sea) along the way.

Or Monastery of Kaisariani, only 8 km out of Athens…

Lake Marathon is eight kilometers west of the Marathon village, on the road to the Church of Ayios Stéfanos. Marathon was celebrated in antiquity as the place where Theseus killed the bull of Marathon and the scene of the first great battle between the Greeks and Persians in 490 BC.

As there is obviously a lot of walking involved, it makes sense to wear comfortable shoes. Furthermore, some sites actually prohibit high heel shoes as they may damage the property!

Buy the combined ticket for the Acropolis and surrounding attactions.

Some food recommendations in Athens: