Finding Truth in Sedona – Where Have All the Celebrities Gone

Located somewhere between Shangri-La and La-La-Land, Sedona, Arizona is a truly beautiful place. It is surrounded by stunning red rock formations and miles of malarkey. This year, as in years past, about four million tourists are expected to visit the area. Many of them will be on the lookout not only for gorgeous scenery but for beautiful people as well.

These days Sedona is more famous than ever, its natural beauty and quirkiness the subject of endless articles and TV features. One would think that a place as beautiful and famous as Sedona would be teeming with celebrities, right? That visitors can expect to rub shoulders with the rich, famous and infamous at local coffee shops and bistros? Wrong. Very wrong. 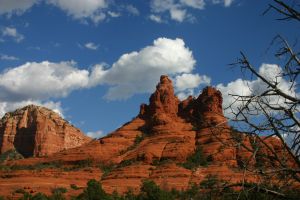 Because of the presumed gullibility of the typical tourist, and some local tour guides’ quest for quick and easy sound bites (and bigger tips), a kind of local mythology has been created around a fantasy Sedona inhabited by A-list movie and TV stars, athletes and politicians. “That’s Madonna’s house over there,” says a lady Jeep tour driver with a straight face. “Sharon Stone lives on the next block. Al Pacino’s mansion is just down this street and to the left.”

The truth: A lady named Sharon Stone sells real estate in Sedona. So does a gentleman named Randy Moss (who never played tight end for the Raiders). At the moment, there are no celebrities living in Sedona. Actress Diane Lane keeps a second home in the city, population about 8,000. A certain Republican senator named John McCain sometimes stays at his ranch in Page Springs, about 10 miles from Sedona’s western outskirts.

And that’s it. Only a couple of celebrities lived here full-time in recent years — the beloved actor and song-and-dance man Donald O’Connor and actress Sean Young. O’Connor died in 2003 at the age of 78, and is buried in Forest Lawn Cemetery in Hollywood. Ms. Young, who has appeared in many films including “Blade Runner” and “No Way Out,” her two most famous roles, moved back to Los Angeles a few years ago.

Ann Miller, the raven-haired, leggy dancer whose tap-dancing skills won her stardom during the golden age of movie musicals, kept a second home in Sedona. She was often seen at local restaurants, although her main residence was in Beverly Hills. She died there in 2004.

Actor Nicolas Cage loves Sedona and often came here with his (now) ex-wife, Lisa Marie Presley, a few years ago. He wanted to have a home here and was even in escrow for a place in an exclusive subdivision near the town’s tiny airport. He dropped out of escrow, so the story goes, because he wanted to own the airspace above his home and it wasn’t for sale.

But because there is usually a high BSQ (B.S. Quotient) in tourist towns, not only to lure the tourists but to make them think they might bump into somebody famous while sipping a $5 cup of coffee at Starbucks, the nonsense continues unabated. It’s true that many famous folks pass through Sedona because they, like us ordinary humans, love looking at jaw-dropping scenery.

At the beautiful Enchantment Resort, employees must sign an agreement that they will never reveal the names of famous people who stay at this posh retreat (its Mii Amo Spa costs around $1,000 a day). So…don’t ask, and I won’t tell!

Actress Jane Russell used to live in Sedona and ran a nightclub called Dude’s. Orson Welles rented a house here for his wife and daughter and often visited, once had to be rescued during a major flood in the Seventies. Lucille Ball never lived in Sedona, nor did Walt Disney despite persistent rumors. Bob Dylan has passed through, and Johnny Depp, and Mike Tyson, and Muhammad Ali, and Regis Philbin, and Martha Stewart, and…and…

And, yes, Oprah! In the summer of ’06 she visited our local health food store during one of her cross-country tours, told a friend of mine, “There’s nowhere to eat in this town!” and bought a bunch of fresh organic vegetables.

And that’s the truth. If you really want to find truth in Sedona, take a hike. It has some of the best hiking trails on the planet. You might even meet me on a trail someday. I’ll be happy to give you an autograph.

Learn more about beautiful Sedona, Arizona and its lively cultural, artistic and political scene at our blog. Also enjoy some unique insights on important issues of the day by Liberty and Marv Lincoln. Marv’s writings have been published in many national periodicals, including Newsweek and more. Visit www.sedonapr.com for details.