Bormes-les-Mimosas means “the Sunny One” and it’s an accurate description of this medieval village that is perched high on a mountain top. 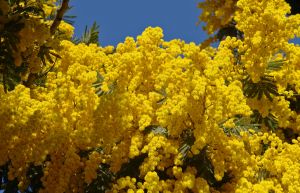 Bormes-les-Mimosas still has the imposing remains of a castle and the rampart walls that protected it during the Saracen invasions. Its official title as the “village of flowers” was given to Bormes-les-Mimosas for good reason – first because of the flowering trees called “Mimosas” that line the streets and lean out over stone walls are as bright as the sun itself.

And secondly, because no matter what time of year you’re visiting the French Riviera, the beauty of Bormes-les-Mimosa will be sure to please. The sun beats down on the pink-tiled houses that crowd together on both sides of the narrow winding streets
and alleys, and window boxes, glazed ceramic pots and gardens overflow with jewel-colored flowers. You’ll feel as if you’ve stepped back in time or walked into one of the paintings of an old master.

To those familiar with this quiet little village, one of the most fascinating aspects of Bormes-les-Mimosas are its narrow little alleyways that lead to secret places filled with unexpected treasures. Walk along a narrow alley and turn through a narrow
archway and you might find a bubbling fountain, with the flowing water making music for the birds and a lazy cat napping out in warm sunlight. Or walk down a cobblestone staircase and find yourself in the midst of a tiny public garden.

Turn another way and head up a narrow pedestrian walkway and you’ll come across a comfortable old bench that invites you to sit back, relax and enjoy the spectacular views of the bay and the Golden Iles in the distance, or the Massif des Maures mountains.

The nearby coast has always played a very important part in the rich history of Bormes-les-Mimosas. In fact, one of the most famous fortresses in the area, “Bregancon” has been one of the official residences of the president of the French Republic. Perhaps because it sits high above the Mediterranean Sea,and offers complete privacy and security as well as its beautiful gardens, thick forest and its own private beach away from the curious and prying eyes of onlookers and the paparazzi,
Bregancon has always been a favorite weekend and summer get-away of the the president, his family and visiting heads of state or celebrity guests.

You’re invited to a party! Bormes-les-Mimosas is a must-see to add to your vacation itinerary for the sights, sounds and colors that can only be experienced during festival time! Throughout the spring and summer months, Bormes-les-Mimosas is one of “the” spots for true music lover for classical and folk music concerts. Proud of its rich heritage, culture and traditions, the villagers organize a number of other large-scale events throughout the year, including the “Festival of the Mimosas” during January, the
traditional “Corso Fleur” that attracts thousands of visitors every year in February (and which, for those of us who live here, really heralds the coming of spring!)

In May the “Sports en Lumiere” celebrates sports for everyone and is a great time to see many of France’s top-level athletes. Autumn means a celebration of the grape harvests with the “Santo Coupo” and there’s even a car rally in October, for visitors who enjoy a little more excitement. And finally, Bormes-les-Mimosas shouldn’t be missed if you’re planning a trip to the French Riviera in December, because the entire village is transformed into a living “crib” as it is called, and celebrates Christmas and the
little Santons figures that Provence is known for with traditional costumes, food and fun.

Looking for a break from the crowded beaches of the French Riviera, or the wall-to-wall people packed into Saint Tropez during the summer months? Come to the harbor of Bormes-les-Mimosas and sit in a sidewalk cafe, sipping on a cool drink while you enjoy watching the yachts and sailboats whose captains have recently begun to discover this beautiful port. Then you can lazily wander along the coastal footpaths to find hidden creeks, and beautiful sandy beaches. Or enjoy the many amenities of the Golden Isles and try scuba diving, water-skiing, windsurfing or sailing.

Bormes-les-Mimosas is also a haven for painters, potters, ceramists and artisans who work with silk, leather, wool, wood and metal. You’ll also find soap makers and sellers and other vendors who will set up shop on the little alleyways in the summertime, and offer real bargains for those who want to take a little of Provence and the “Sunny One” home with them!

Learn all about where to go and what to do in the French Riviera from an American who lives there! Discover the best places to eat, stay and shop. Why settle for an ordinary vacation, when you can create an extraordinary one? French Riviera Vacation Guide

Save $75 with Travelocity Last Minute Deals