From the Renaissance to the Riviera – a Historic Stroll Through Rimini, Italy 1

Who knows what Sigismondo Malatesta, the famous 15th Century Lord of Rimini (and original ‘renaissance man’, as described by American poet Ezra Pound), would make of his city were he to return today. 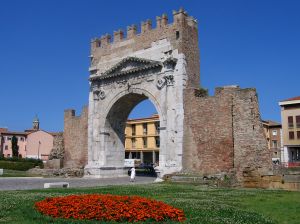 Apart from the obvious differences between the renaissance city (many significant parts of which remain, for example Malatesta’s castle) and that of the 21st – i.e the presence of skyscrapers, electrically powered street lights, and the ever present motor vehicle – one thing would perhaps strike him above all, the move to the seaside.

In Malatesta’s time Rimini and its defences were decidedly inland, running around what is considered the centro storico today. Malatesta, on coming to power, embarked on a huge building programme, which included the famous Tempio Malatesta – the first, and one of the finest examples of neo-classical architecture in Europe – and his huge, and at the time thoroughly modern fortress, the rocca malatesta. His city, though, was built primarily on top of the existing city’s site – that is to say on the site of the Roman city of Ariminum, founded in approximately 286 B.C. Existing roman monuments, including the famous Ponte di Tiberio and Arco d’Augusto(which remain impressive monuments today) were incorporated into his city, all of which – even given the retreat of the sea over the centuries, were inland from the beach.

Strolling around today’s city, Malatesta would find, at least during the summer months, a gravitational pull towards the expansive sandy beaches that would probably puzzle him. In his day the notion of lying on the beach for the day, with an occasional swim to cool off, would have seemed particularly strange, if not downright dangerous. The beach was a place for brigandry and smuggling, away from the protection of the city’s defences. Let’s not forget, as well, that in Malatesta’s time cities like Rimini were often at war with neighbouring city states. Throughout his lifetime Malatesta was in continuous conflict with powers like his neighbour Federico da Montefeltro, Lord of Urbino, or indeed the Pope (Pius II, for example, excommunicated Sigismondo in 1460 declaring him a heretic). Sunbathing and sea bathing would not, perhaps, have been high on the average citizens’s priorities at the time.

So when did Rimini start to change, to become a town that is, for Italians (and increasingly tourists from around the world), synonymous with sun, sea, and sand? Professor Feruccio Farina, of the University of Urbino, in his fascinating study of the history of seabathing in Rimini – Una costa lunga due secoli (Panozzo Editore) – gives us a portrait of one of the first foreign tourist bathers to dip her toes into Rimini’s gentle waves. Her name was Elisabeth Kenny, and she was the young Irish wife of a Roman noble. She’s recorded as having visited Rimini in August of 1790 (over 300 years after the death of our Sigismondo), and stayed for over two weeks to benefit from the sea waves and air.