Like many large cities, Los Angeles is a collection of smaller towns, glued together with a grid of roads and freeways.

Roughly 60 miles across it is one of the largest cities by area in the US. Crossing from side to side can take an hour, but with freeway traffic conditions you are more likely to take at least double this time. 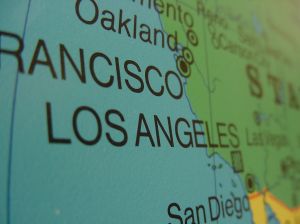 Downtown LA is more of a commercial district of skyscraper office blocks than a shopping district. You will find shopping in the form of small shopping plazas and larger shopping malls dotted all over the LA basin.

In this respect LA is a little disappointing if you were looking for an American version of London or Paris. However there is still plenty to see and do, it just takes a little planning so that you are not spending your entire time in a traffic jam or driving endless miles across city.

Places To Visit
Here are some selected places to visit whilst in LA.

Angeles Crest Highway
A little out of the city this scenic drive twists and turns much like Mulholland Drive along the mountainous crest of the LA basin.

Long Beach
Home of the Queen Mary which can be toured.

Dodger Stadium
Whether going to a ball game or not, the stadium is worth a visit. Top of the Park souvenir shop sells LA Dodger branded clothing and other baseball souvenirs. Parking is free on non-game days.

Griffith Park
A good vantage point from where you can see the cluster of skyscrapers making up the commercial downtown of LA and also the world-famous Hollywood sign.

Mann’s Chinese
A must-see, even if it’s much smaller in real life than you would have imagined! Famous foot/hand/etc. prints of those legendary Hollywood stars.

Frederick’s Of Hollywood
Also on Hollywood Boulevard is Frederick’s flagship lingerie store, world-renowned. Includes a free museum of lingerie worn by stars of the silver screen

Mulholland Drive
The famous drive that has views all over the LA basin and will introduce you to the scale of the city.

Universal Studios
More of a theme park than studio tour, but true to the glamour and glitz of Hollywood.

Warner Brothers
In contrast to Universal, this is a tour of a working studio. A costume museum full of fascinating history is the start of a tour that includes prop departments, workshops, sound stages, usually a chance to sit in on a TV series rehearsal in a sound stage and a chance to wander around some memorable backlot sets.

And don’t forget neighboring Orange County which is home to the quintessential Southern Californian Beach Cities of Newport Beach and Huntington Beach where life slows to the ebb and flow of the Pacific along their golden sandy shores. Or for some great shopping visit world class South Coast Plaza at Costa Mesa or the outdoor mall of Newport Beach’s Fashion Island.

Tony is a keen traveler and has enjoyed many visits to California over the years.

Tony works for Strathlorn Travel who specialize in travel for the independent traveler.