If it weren’t for the coral reef located in the Florida Keys, the United States would have nothing to offer as far as scuba diving and coral reefs are concerned. In addition to the living coral reef that has been a main scuba diving attraction of the Florida Keys for more than 35 years, numerous dive able wrecks are scattered throughout the waters providing exotic and breathtaking artificial reef habitats. 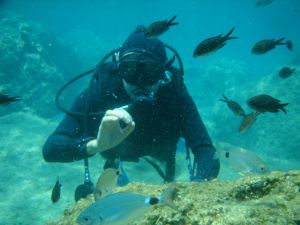 Here is a brief overview of some of the wrecks you can visit while scuba diving in the Florida Keys:

Benwood – The Benwood is perhaps the oldest scuba diving wreck site to be found in the Florida Keys. This WWII ship was sunk in 1942 when it collided with another whip while dodging German U-boats near the coast of Florida. While the wreck is not intact (it was blown apart because it presented a boating hazard) it is home to a wide array of marine life. Scuba diving near the Benwood will bring you face to face with critters such as Pork fish, grunts, lobsters, moray eels, glassy sweepers, Sergeant Majors, Goatfish, and Christmas Tree Worms. Since the ship had run aground before it was blown up, the dive is a relatively shallow one and great for novice divers as well as advanced divers.

Cayman Salvage Master – This wreck that can be seen while scuba diving in the Florida Keys is a Cuban refugee vessel that was confiscated by the US government. The ship was tied up to a dock where she sank before she was re-floated. Then, during her burial voyage of 1985, she sank in about 90 feet of water coming to rest on her side. Recently, Hurricane Katrina righted the ship and now divers can swim along the hull and deck hoping to spy huge Jewfish and moray eels that reside in the open hatches of the wreck.

Duane – If you’re experienced at scuba diving, you might want to pay a visit to the wreck Duane while you’re in the Florida Keys area. This US Coast Guard Cutter was intentionally sunk in 120 feet of water in the year 1987. Due to the strong Gulf Stream current and depth associated with the wreck, only advanced divers are allowed to dive this site. The Duane is home to grunts, sponges, chubbs, jacks, barracuda, and numerous tropical fish.

In addition to these three wrecks that can be seen while scuba diving in the Florida Keys, there are several other wrecks in the area that have been intentionally sunk to become artificial reef habitats. Each offers a different experience and a unique look into how the ocean transforms a foreign object into a beautiful habitat where marine life can grow and thrive.