Some cities bring to mind the word “empire” – Paris, Saint-Petersburg… Without a doubt, Vienna would be at least the third. 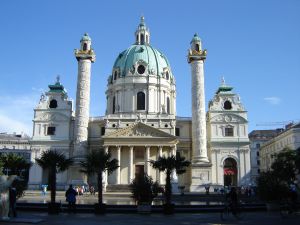 You don’t even have to know the city’s history – you’ll understand everything from the first sight. Its all about the pomposity of its architecture and the spaces between its buildings. It’s just like in the Japanese painting, where untouched spaces are no less important than the image itself – this way, they stimulate the flight of fancy. Here, in this city, grand voids between huge buildings will fill your mind with some ideas. That is why empty space is not something you regret about.

The city of waltzes, parks, baking and wine – that’s what Vienna is. The capital of Austria is a truly cosmopolitan city. In the course of many centuries different nations that inhabited the city’s territory shared their cultures and traditions with each other. That is the reason why local people have such an intriguing and sometimes cynical character.

In approximately 500 BC the Romans chose a settlement on a Danube river as a place for their frontier city, “Vindobona”. Since then the city, now called Vienna, played a principal part in European history. This is the place from where Austria grew into a powerful empire. The capital became even more magnificent during the rule of the Hapsburg dynasty. Those days are gone, but local people still follow historical traditions. Moreover, local masters of the past left a huge cultural heritage to the future Viennese generations.

In 18th century Vienna got popular all around Europe as the city of rich culture, especially music. Great musicians, such as Haydn, Mozart, Schubert, Beethoven, Bruckner and Lanner lived and worked here, and their music is still performed at concert halls all around the world. And in the end of the 19th century the city’s artists and architects, such as Gustav Klimt, Egon Schiele, Oskar Kokoschka, Joseph Hoffman, Otto Wagner and Adolf Loos committed cultural revolution which opened a new page in history of experimental and radical arts.

Still, Vienna is a Baroque city. While tourists scrutinize golden statues and churches with rosy-cheeked cherubs, wander around the treasure-filled museums, or while away their time in one of the inevitable cafes, they get the feeling that splendour and richness are all around them. This pomp looks like delicious whipped cream – the citizens’ favourite Schlagobers which adorns many Viennese cakes.

The Viennese style is really pompous and flowery: white horses prancing by the sounds of an elegant music, rich drapery adorning local monuments, beautiful decorations embellishing the city’s strict houses, gilded Johann Strauss statue standing on a grave among the greenery, passionate music by Richard Strauss; geometric mosaic on ornamental canvases by Gustav Klimt, slow measured melody of mechanical clocks. This majestic, attractive and magic city enchants its guests with its charm and aristocratic elegance. This is the place where waiters still bow as if greeting Hapsburg prince. The waltzing city. Vienna is never in a hurry and it would be best if you were not hurrying as well – this is a good way to feel the true spirit of Vienna.