To describe the Chamonix Valley as beautiful would be a lot more then an understatement. It is, without doubt, one of the most picturesque areas in the world. 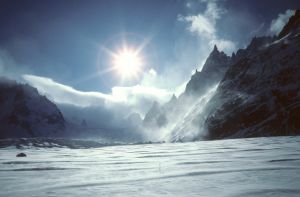 One hour from Geneva by road, this skiing and mountaineering haven has become popular the world over with skiers, mountaineers, climbers and mountain lovers alike.

The valley itself is dominated by Mt Blanc, as well as other ranges meeting in this most dramatic mountain area. Towering pillars of granite dominate the area often bewhildering you with the very scale that they represent. It is difficult not to be impressed once the clouds lift, the peaks towering above you like sentinels.

Chamonix has become very popular with the British, who have now gathered there in significant numbers, though many leave and go somwhere else once the ski season is over.

Scandanavian peoples also appear to favour the area, and, of course, there are the French.

Chamonix has become so multicultural in some areas that it would be easy to say that it is not typically French. Though French is widely spoken, you will never be far from a British accent. Most Brits have picked up the baton, so to speak, and learnt French, but a minority remain who expect to use English wherever they go. This has lead to small amounts of friction between the two communities, but nothing too serious.

If you are going to go to Chamonix, you should expect to speak some French.

As a ski area goes, Chamonix has some of the most extreme skiing available to man. There are many resorts, all reachable via a small bus or cable car ride from Chamonix or the surrounding area. For the more extreme routes like the Vallee Blanche you should look to find yourself a guide, or ski the route with people that know the way, or you may find yourself in a crevasse.

Some skiers complain of the layout that Chamonix offers – of course you can’t please all the people all of the time – if you want extreme skiing, come to Chamonix, and expect to take a few short journeys to the venue of your days skiing, that’s all.

As well as being a mecca for skiers and snowboarders, Chamonix offers excellent climbing and mountaineering options, with climbs up fantastic granite cliffs suitable for all comers, stretching to huge extreme alpine rock routes like the Walker Spur. Pleasant woodland walks can also be easily found!

Not far from Chamonix are the mountain villages of Argentiere and Les Houches. Les Houches is only a 20 minute bus journey from Chamonix and is actually a ski resort in its own right, so you don’t need to be in Chamonix itself to enjoy some of the best skiing the Alps has to offer.