The Incredible Lightness of Taos

“For art to exist,” wrote Nietzsche, “for any sort of aesthetic activity or perception to exist, a certain physiological precondition is indispensable: intoxication.” 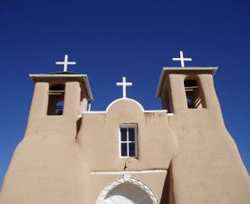 But not necessarily intoxication of the alcoholic kind, which may or may not have stirred the muse of such great writers as Dylan Thomas, Ring Lardner and Malcolm Lowry.

The English novelist, D.H. Lawrence, became intoxicated with New Mexico early in this century and he may have explained why, for over 100 years, artists have flocked to Taos in northern New Mexico at the southern tip of the Rocky Mountain chain. Lawrence wrote: “[New Mexico] had a splendid silent terror, and a vast far-and-wide magnificence which made it way beyond mere aesthetic appreciation. Never is the light more pure and overweening than there, arching with a royalty almost cruel … “

When Taos artists are asked what brought them to this remote little town in the northern New Mexican mountains, they invariably reply: “The light!”

Taos lives and breathes art. Every other retail outlet it seems is a gallery. The walls of every restaurant and shop are adorned with the works of local artists, who all appear to make a surprisingly good living.

Says Taos artist, Ray Vinella, whose painting “Taos Light” became the official poster for the 1991 Taos Arts Festival, “Taos is definitely an art center. I love Taos. I think this place is paradise. It’s perfect for an artist – the multiple terrain is uncanny. Forest, desert, mountains, all kinds of terrain to excite an artist.”

With a resident population of only 4,300 Taos is dependent on tourism. The town and county have much to offer the visitor anytime of the year. Taos Ski Valley has become renowned for its light powder, bright winter sunshine and challenging slopes. The world-famous and much-photographed Taos Pueblo is the largest existing multi-storied Pueblo structure in the United States. It has been continuously inhabited by the Taos Indians for nearly 1,000 years.

Taos Plaza, still the center of the town, is the site of the original Spanish settlement dating from 1790, although earlier Spanish settlers were in the area in the late 16th-century. Historic walking tours of the Plaza and district with knowledgeable guides may be arranged.

More recent historical associations may be found in the Kit Carson Home and Museum, showing the lifestyle of the famous mountain man and western scout.

Literary and artistic ghosts are everywhere. Willa Cather lived in Taos. So did Georgia O’Keefe. Just north of Taos in San Cristobal is the D.H. Lawrence Ranch and Shrine. The writer and sometime painter lived here for three years.

But it is art that makes Taos tick. The museums in Taos all focus on art and the art history of the community. The Harwood Museum, on Ledoux Street, two blocks from the Plaza, collects, exhibits and researches the art, artists and art history of Taos County. Its collection includes representative works by many of the most significant artists who have worked in the Taos area. The Harwood is open daily except Sunday and there is no admission fee.

The Ernest Blumenschein Home and Museum, also on Ledoux Street, is the large adobe home of the co-founder of the Taos Society of Artists, organized in 1915. The home contains antique furnishings and art of the Blumenschein family and other Taos artists. The house itself dates from the late 18th-century.

The Millicent Rogers Museum, located six kilometers (four miles) north of Taos, was home to Millicent Rogers (1902-1953), a wealthy socialite who moved here in 1947. A passionate designer and stunning beauty she was frequently featured in the pages of Vogue and Harper’s Bazaar. She collected the Native American jewelry, textiles, basketry, pottery and paintings that are now the core of the museum. Also on display are permanent and temporary exhibits of Hispanic and local art.

The San Francisco de Asis Church, eight kilometers (five miles) south of Taos on Highway 285, was built in 1815 by Franciscans. As a spectacular example of adobe mission architecture it is the most frequently painted and photographed church in the United States. Regular services are held on Sundays and holidays and the santuario is open to visitors Monday to Saturday, 9.00am to 4.00pm. A 15-minute video presentation explaining a mystery painting and the church’s history and restoration is shown throughout the day in the nearby parish hall.

Martinez Hacienda, on Ranchitos Road three kilometers (two miles) from the Plaza, is one of the few fully restored Spanish Colonial adobe haciendas in New Mexico open to the public. The fort-like building has 21 rooms and two courtyards with exhibits on Spanish culture and history with photo exhibitions and scheduled “living museum” demonstrations. Padre Jose Antonio Martinez (1793-1867) was a local priest, politician and folk hero who brought education and a sense of self-determination to Taos’s agrarian people.

The Fechin Institute, 227 Paseo del Pueblo Norte, two blocks from the Plaza, was the home of the famous Russian artist, Nicolai Fechin. It is a traditional southwestern adobe home, but with a Russian-style interior full of Fechin’s extraordinary handcarved woodwork. The Institute holds annual exhibits and special art workshops.

It was in fact the work of Nicolai Fechin that first brought artist Ray Vinella to Taos in 1969. At the time he was a successful illustrator for Walt Disney. One day, while walking down Wilshire Boulevard in Beverly Hills, he saw a group of Fechin’s paintings in a gallery. “Those paintings knocked me out!” he says. “I didn’t understand what he was doing, but I knew that I was trying to speak his language.”

Vinella did some research on Fechin and discovered that he had done those incredible oils in a place called Taos.

One year later Vinella threw up his lucrative career with Disney to pursue fine art in Taos. “I was ready to dig ditches if necessary to do my art,” he recalls. Initially he almost had to resort to manual labor to survive. But today Ray Vinella and his wife, Leslie Crespin, are both successful artists doing what they love to do while living in a beautiful home high in the mountains overlooking the “paradise” that is Taos.

Poet Robert Browning said, “Art remains the one way possible of speaking truths.” The motor vehicle license plates in New Mexico bear the slogan “Land of Enchantment.” A land of enchantment where fairy stories come true and truth may be perceived through the beauty of art. Do you need another reason to visit?